Male Heart Vs. Female Heart ❤️ A Look at Heart Disease and Women

When you hear "risk factors for heart disease" the majority of people immediately visualize a man. We're conditioned to it by the media, our physicians, and pharmaceutical companies.

A few years ago, Senator Elizabeth Warren sent her subscribers a unique Valentine's Day message. She told a touching story I originally thought was about her father.

"When my daddy had a heart attack...my mother took him to the hospital, where they kept him for a week. Forever after, my mother worried about his heart. And every year she would push and pull until he went to the doctor for a check up. Nearly 40 years later, my daddy died from prostate cancer. He'd never had any other problems with his heart.

By the time he died, my mother had been gone for two years. She had been in the hospital for some minor surgery. Daddy was sitting with her, holding her hand, when she suddenly sat up in bed and said, "Don, there's that gas pain again." She fell back on the pillow, dead from a massive heart attack. After the autopsy, the doctor explained that my mother had advanced heart disease and that there was evidence of damage over a long time – that her heart was barely functioning. All those years, she had worried about my daddy. But she'd never thought about her own heart."

Senator Warren did a great service sharing this personal story about her mom – born on February 14th – with her followers. She went on to discuss how important it is that women understand their own heart disease risk factors.

This is a story you should expect to see repeated over and over throughout the world because heart disease is the #1 killer of men and women globally.

When a cardiac event claims the life of someone you love, you have no time to prepare. For so many, their first cardiac episode is their last – a statement that's truer for women than for men. More women than men die of heart disease every year and there simply isn't much said about it.

You should hear more coverage from the news or the medical industry about a disease that kills a woman in the United States every minute.

Hardly a peep about the HEARTS of WOMEN. 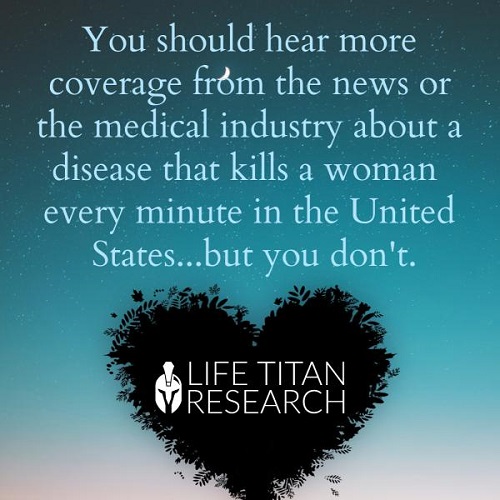 Even the majority of scientific research done to date is skewed to reflect the effect of coronary heart disease on men...not women.

A report on the "Gender differences in coronary heart disease" was published in the Netherlands Heart Journal. It outlined the gaps in perception, prevention, treatments, and risk factors of heart disease in women.

"The under-recognition of heart disease and differences in clinical presentation in women lead to less aggressive treatment strategies and a lower representation of women in clinical trials."

They go on to point out several heart disease risk factors shared by both genders but are more dangerous for women than their male counterparts.

The best way to diagnose degenerative heart disease or determine if a woman is in the midst of a heart event is through positron emission tomography (PET) or cardiovascular magnetic resonance (CMR) techniques.

These tests are not always available, simply aren't offered, or are not covered under most insurance plans which may cause patients to decline the high expense of the more accurate tests. These tests are better able to define dysfunction in smaller vessels and account for breast tissue where other imaging methods may fail. Women have been sent home to die while experiencing a heart event because their symptoms are not correctly diagnosed.

Though researchers are aware of these basic facts, there have been few studies and even fewer pushes to get the information to the female population. The closest thing to mass public information is the American Heart Association's "Go Red for Women" campaign.

It has to be stressed through entertainment media, commercials, insurance plans, schools, workplaces, and so much more. Most women (and an amazing number of men) know basic facts about breast cancer and (incorrectly) believe it to be their greatest health threat.

It's your heart. Your heart quitting on you without symptoms, without fanfare. That's your greatest risk. We have to push for more information and share that information with every woman we know.

As the Netherlands study stated in their conclusion, "Many biological differences in atherosclerosis between men and women are not yet clarified." Still not clarified. We are decades behind research of men and heart disease.

Women, it's time we catch up.

Much like Senator Warren's mother, perhaps you've been so focused on the hearts of your fathers, brothers, sons, and husbands...that you've been ignoring your own.

No matter your gender, age, or current health condition, there is more that can be done to protect your body's pump system. Right now, you need to make your heart a priority. Make the hearts of your loved ones a priority.

Learn about fascinating new research, cutting edge technology, and ways you can boost the health of your heart right now to keep it pumping strong for decades to come.

Whether heart health has always been a big deal to you or you’re only now realizing how important it is, “Heart Strong” is the book you need to read.

Why Dark Chocolate is a Heart Healthy Food

Women, Heart Disease, and Stress: The Quiet Claiming of Lives

The Hidden Benefits of Banana Peels – Don’t Throw It Away

If you’re interested in health, it’s probable you already know which “bad” carbohydrates you need to avoid.  What’s critical to eating success is a healthy carb list you can use to substitute the not-so-good ones most of the time.   Your body needs carbohydrates but the standard Western Diet consists of too many (and the ...