The heart disease risks in women are just as critical as those facing men.

However, this rising epidemic gets very little press coverage. Women who show up at their doctor’s office or their local hospital during a heart event are treated differently than their male counterparts.

It’s as if the medical community forgets that heart disease is the #1 killer of women – just as it is for men.  To be fair, many women don’t realize (or remember) this either. 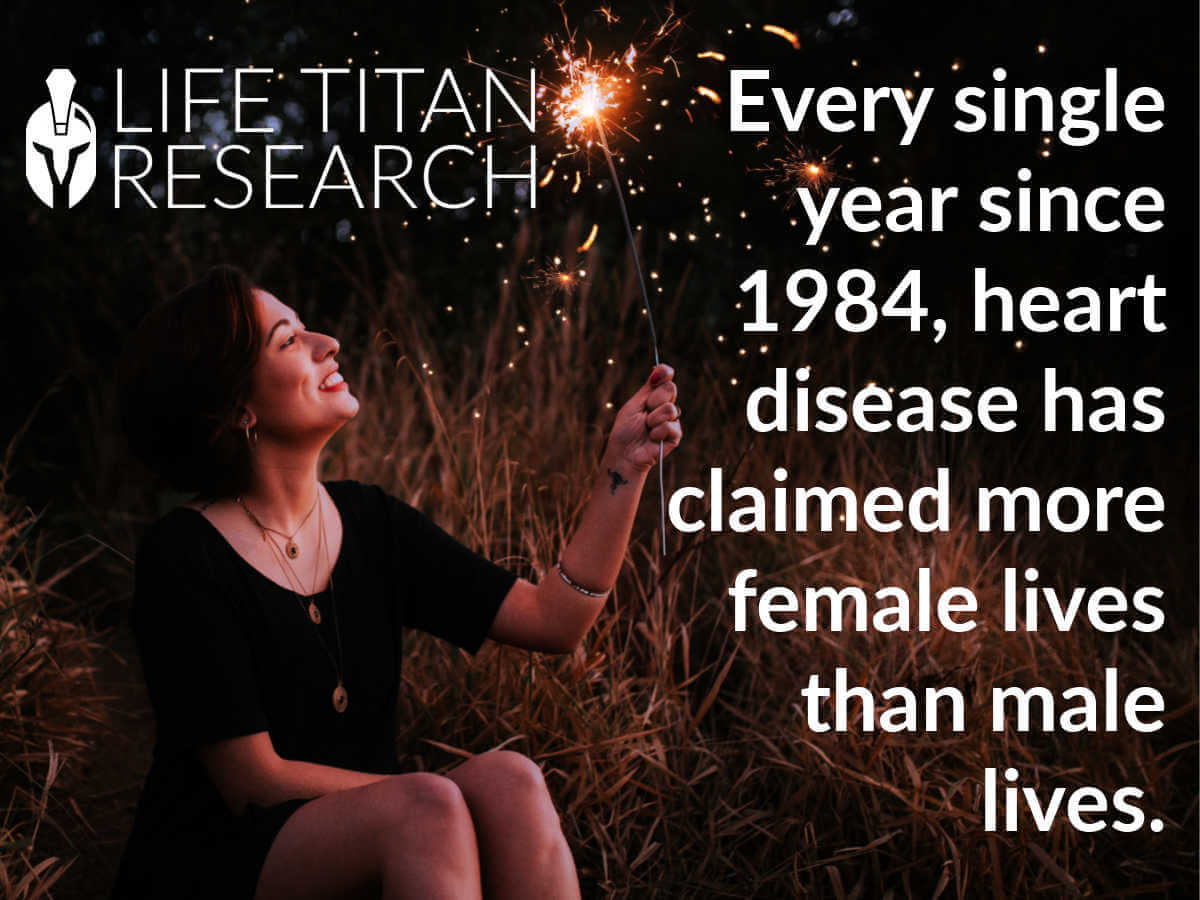 Heart disease kills women and men around the world more than any other disease (by a lot).  It’s been the #1 cause of death in the United States for almost 100 years (since 1921). Heart disease and stroke account for more than 40% of all deaths globally.3

While the signs, treatment, or seriousness may be underplayed when a woman is in the midst of a heart event, the risk factors that can lead to it are similar for both genders.

The last one is becoming an epidemic all its own.  Chronic stress is literally beating up our bodies and making us sick.  This is mainly due to the rampant inflammation caused by “stress hormones” (cortisol and adrenaline) that flood your system when you’re tense or upset for sustained periods.

Heart disease isn’t the only major disease that lists chronic stress (and inflammation) as a primary bio-marker.  However, it is the most critical because it claims so many already.

Stress is a particularly dangerous heart disease risk for women, according to findings released by the Medical University of Vienna.  Researchers wanted to know why so many women younger than 55 were dying of heart attack and stroke (most female deaths are after age 55).

They discovered the underlying answer was stress.

They also determined that even if both men and women shared the same risk factors otherwise (smoking, obesity, poor diet, and so on), women’s bodies experienced a greater impact.

Alexandra Kautzky-Willer, professor of Gender Medicine at the university, explained, “Women have a different age distribution, other clusters of risk factors and the vascular changes in the heart also differ morphologically [structurally].  The diagnosis and therapy are often more difficult: examinations such as ECG or ergometry are less conclusive; even the heart attack blood markers in women could be improved with new, specific limit values and new gender-specific biomarkers could be established.”4

The hearts of men and the hearts of women are the same and yet very different in how they function, how they age, and how they break down.

The hearts of men and the hearts of women are the same and yet very different in how they function, how they age, and how they break down.

For most women, stress has always been a part of their daily life. They put other people and situations above their own health because that’s the way it’s always been. A difficult habit to break but one that needs to go because women are stressing and worrying themselves into sickness, depression, and early death.5

You probably know (by now) the importance of diet, exercise, sleep, and getting rid of bad habits to keep your mind, body, and spirit strong into oldest age.  You can make real, effective changes in your own life that safeguard your heart (and the rest of you, too).

Stress (coupled with all the other issues in our diet, lifestyle habits, environment, and so on) is a major heart disease risk to women.  Making small changes each day can help you begin to lower the stress (physically, mentally, emotionally, financially) that you’re going through.

You must make the health of your heart a priority.  You need to do it now. Experts worldwide agree that roughly 80% of heart disease cases are preventable.6

That’s a statistic you want to be part of!

Why Dark Chocolate is a Heart Healthy Food

Women, Heart Disease, and Stress: The Quiet Claiming of Lives

The Hidden Benefits of Banana Peels – Don’t Throw It Away

Male Heart Vs. Female Heart ❤️ A Look at Heart Disease and Women

When you hear "risk factors for heart disease" the majority of people immediately visualize a man. We're conditioned to it by the media, our physicians, and pharmaceutical companies.A few years ago, Senator Elizabeth Warren sent her subscribers a unique Valentine's Day message. She told a touching story I originally thought was about her father."When ...